Expocentr Krasnaya Presnya opened in 1959 and has been used for numerous international fairs and exhibitions ever since. It includes eight pavilions with a total exhibition space of 80,000 m2, including 30,000 qm of outdoor space, making it the largest exhibition complex in Russia.

All pavilions offer communications and technical facilities. Some of the halls can be used for symposiums, press conferences, presentations, lectures and business meetings.

Expocentr Krasnaya Presnya is just 15 minutes by car from the city centre and can be easily reached by underground and bus. Many hotels like the Ukraina, Mezhdunarodnaya, Radisson Slavyanskaya, Belgrad and Mir as well as the Russian White House (Parliament) are located in the vicinity.

Krasnaya Presnya Street and Smolenskaya Square are situated not far from Sadovoye Koltzo (ring street around downtown) at the Moscow River bank and not far from the most prestigious districts with Prechistenka, Stary Arbat, Patriarshy Prudy and Ostozhenka Street with their stunning palaces. The district is also well known for the Moscow zoo, one of the seven “Stalin sky-scrapers” at Kudrinskaya square, the US and British Embassies which are close to the newly built Moscow Business City. 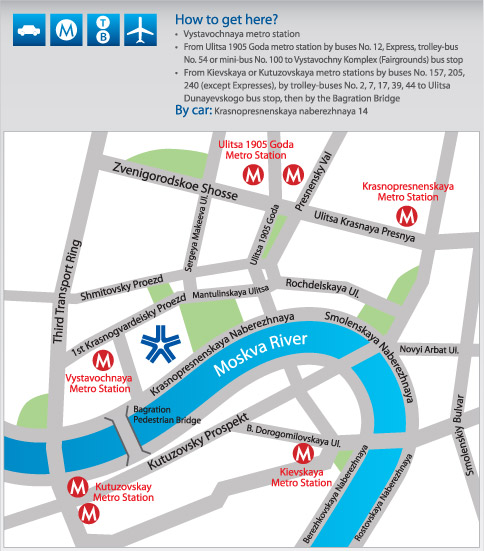